I’m a few dates late on my April TBR but better late than never!

I’ve got quite an ambitious TBR for this month, owing mainly to the fact that I will be spending most of my time at home so this is the perfect opportunity to read lots. You might also notice that a lot of the books I’ve chosen to read this month feature travelling to beautiful (and sometimes fantastical) places and quite a few are set in spring/summer. These are the kinds of books that I really fancy reading at the moment and I’m excited to read some pure escapism.

Let me know what you’re planning on reading this month in the comments below! 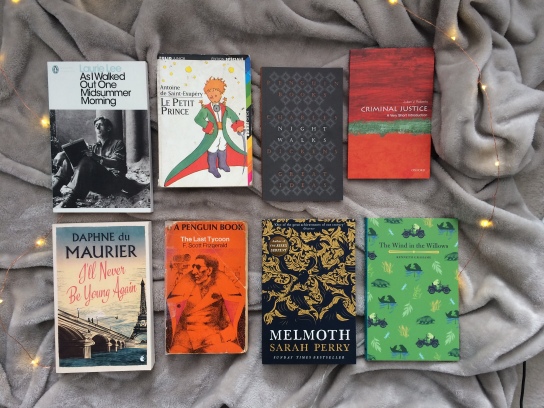 I’ve always said that I’m not the biggest fan of Fitzgerald. Of all the classic and modern classic authors, he’s always been someone that’s not interested me greatly. I’ve read The Great Gatsby and thought it was ok – though I did read it at the same time as the film was released so I’m not sure if I had a Great Gatsby overkill. I know a lot of people are massive fans of his so I want to give his work another try. This is the only other book of his that I have, so that’s why I chose to read this one!

The Last Tycoon was published posthumously. Set in 1930’s Hollywood at a time when the depression was receding and the Hollywood glitz and glamour was rife, The Last Tycoon is a love story at its heart.

There’s something about historical fiction novels that I know will just be pure escapism for me and completely remove me from anything going on in my mind. I have read The Essex Serpent by Sarah Perry and really enjoyed it. I have heard that Melmoth is much darker than The Essex Serpent so I’m looking forward to reading more gothic literature.

The Wind in the Willow by Kenneth Grahame

I’ve never read The Wind in the Willows before, but for some reason I know the general gist of the story. I thought this would be a great spring read and, although it might make me wish I was outside walking alongside a river and feeling the sun against my skin, I know it’ll make me feel warm inside despite everything.

This is my first book in the “A Very Short Introduction” series (I believe there are now over 400 volumes in this collection). I’m really interested in learning more about the criminal justice system, how offenders are sentenced and the process of that. I love watching and reading true crime, so I feel like this short introduction to criminal justice will give me a useful insight into it.

This short read is based on Dickens’ time as an insomniac where he decided to try to cure himself by walking through London in the early hous of the morning, discovering homelessness, drunkenness and vice on the streets. Dickens writes down his findings in this short essay.  It’s part of the Great Ideas publications by Penguin Books, who also publish works by other great thinkers such as Machiavelli, Descartes, Darwin and George Orwell.

For a while now, I’ve been meaning to get back into French. I need to keep up with it otherwise I’ll completely lose all ability I had before. Le Petit Prince is a well-known story that I’m hoping will be easy to read in French (though probably still challenging for me given how long it’s been since I practiced haha).

This will be my first Daphne du Maurier book. Most people say to start off with Rebecca or Jamaica Inn (the most well-known two) but clearly I’m going slightly off-piste. I wanted to read this book by Daphne du Maurier because a large chunk of it is set in Paris (one of my favourite places ever!) and I would really love a book to transport me there right now. The story follows two men whose lives become intertwined through a tragic event. Together the two men set out for adventure, travelling to Norway and through Europe, finally ending up in Paris.

As I Walked Out One Midsummer Morning by Laurie Lee

This is an autobiographical account of Laurie Lee’s life as he leaves the Cotswolds village that he grew up in. Laurie walks all the way to London and there makes a living as a labourer and a violin player. He then decides to travel further afield and ends up in Spain just before the Spanish Civil War breaks out. Although set in Spain, the blurb of this book gives me serious “Down and Out in Paris and London” vibes by George Orwell – a man travelling through a foreign country, using all his skills to try and make money to get by, whilst providing an honest and raw account of what poverty and its struggle feels like.

One thought on “April TBR”