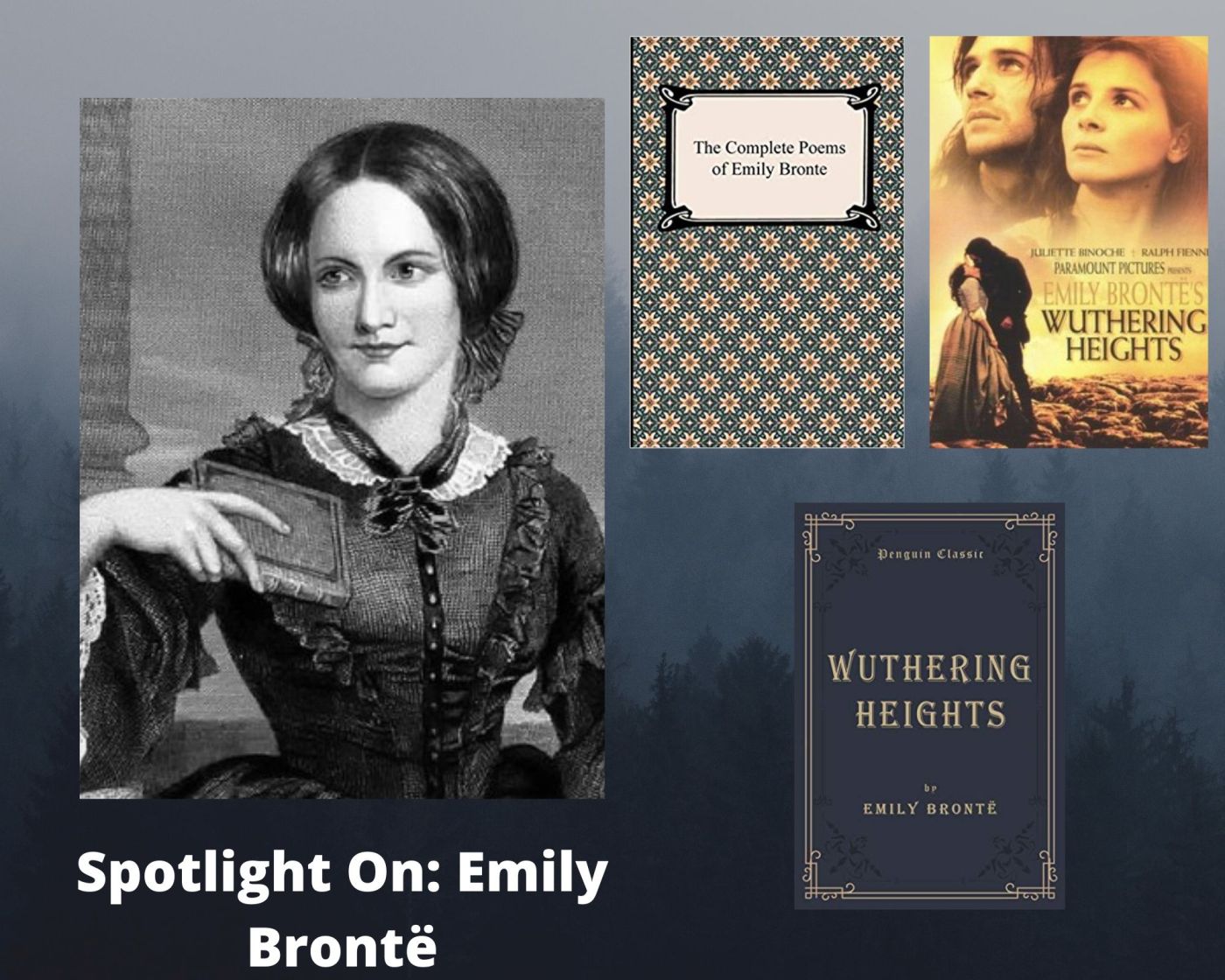 On this month’s episode of “Spotlight On:…” I will be focusing on the life of Emily Brontë. I’m sure I’ll do blog posts on her two sisters Anne and Charlotte at some point in the near future.

I’ve always had more of a connection to Emily Brontë than her sisters and have always really enjoyed her work, particularly her poetry which I read some of last month. To me, Emily has always seemed darker, more mysterious, more introverted than her two sisters.

As always, the blog post will be divided into 6 different parts.

4. Great film/TV adaptations based on their works

Emily Jane Brontë was born on 30th July 1818 in Thornton, Yorkshire. Although the lives of her two sisters are well documented, the record of Emily’s life is quite sparse given that she was so reserved and left no correspondence and her only novel, Wuthering Heights, perhaps paints her as quite a mysterious and spiritual individual.

Her father Patrick Brontë was a clergyman who, in 1820, became rector of Haworth where the family remained for the rest of their life. After the death of their mother in 1821, the children were educated at home (except for one year that Charlotte and Emily spent at Clergy Daughters’ School in Lancashire). It was in 1835 that Charlotte secured a teaching position at Miss Wooler’s school and Emily accompanied her as a student. She only spent three months with her sister at the school as she suffered from homesickness. In 1838, Emily then chose to follow her sister and become a teacher too. This time, Emily managed six months at Miss Patchett’s school near Halifax before resigning.

Emily was very involved with her sister Charlotte’s dream to open their own school in Haworth where they lived so, in February of 1842 they both left for Brussels to study foreign languages. Once again, Emily was very homesick and pined for the Yorkshire moors and wild landsscapes. It is thought that although homesick, Emily was very well-received in Brussels due to her exceptional talent and passionate personality. Charlotte was often seen as a little to temperamental. It was in October that same year that their aunt died and Emily returned home to Haworth.

In 1843, Charlotte came across some poetry that Emily had written and it was in this moment that Charlotte, Emily and Anne realised that all of them had been writing. A year later they published a collection of poems called “Poems by Currer, Ellis and Acton Bell” – initials of the pseunodyms being the names of the sisters. The majority of the book was made up of Emily’s poetry and later criticism has accepted that her poetry was true genius. They only sold two copies of the book.

In 1847, Anne and Emily both received publishing deals with their books Wuthering Heights and Agnes Grey but their publication was delayed until after the appearance of Charlotte’s Jane Eyre. Jane Eyre was incredibly successful so it must have been a huge blow for Emily that Wuthering Heights was described as hostile, too savage, animal-like and clumsy in construction… Sharing her sisters’ dry humour and Charlotte’s violent imagination, Emily diverges from them in making no use of the events of her own life and showing no preoccupation with a spinster’s state or a governess’s position. Many believed, due to the books “masculine qualities” (whatever that means…) that her brother Branwell had some part in writing the book.

Emily’s short life came to an end in December 1848 – her health had been declining rapidly. She had been ill for some time and she died of tuberculosis aged just 30.

After her death, her sister Charlotte made it very clear that Emily was the author of Wuthering Heights and Branwell had played no part in its construction.

Their Works I Have Read

I have read Wuthering Heights many times (and love it more each time) and have recently read some of Emily’s poetry. I am definitely looking to read more of her poetry.

Their Works I Am Yet To Read

Emily Brontë only wrote one novel (Wuthering Heights). The rest of her work was poetry. Though I have read a short Penguin Little Black Classics collection of her poetry, I would definitely like to read more. I do have another poetry collection of hers on my shelf so that might pop up at some point on this blog…

Great Film/TV Adaptations Based On Their Work

I think adaptations of Wuthering Heights come in at a close second after Pride and Prejudice of books that have been turned into TV shows and films.

I haven’t seen any of these adaptations however I am very interested in watching the 2011 version of Wuthering Heights starring Kaya Scodelario.

If you’ve seen any adaptations, let me know your thoughts!

“Treachery and violence are spears pointed at both ends; they wound those who resort to them worse than their enemies.”

“She burned too bright for this world.”

“I wish I were a girl again, half-savage and hardy, and free.”

“He’s more myself than I am. Whatever our souls are made of, his and mine are the same.”

The night is darkening round me,

But a tyrant spell has bound me,

And I cannot, cannot go.

The giant trees are bending

Their bare boughs weighed with snow;

The storm is fast descending,

And yet I cannot go.

Clouds beyond clouds above me,

Wastes beyond wastes below;

But nothing drear can move me;

I will not, cannot go.

I haven’t been able to find many biographies on Emily Brontë alone. Most of them focus on the whole family or all three sisters.

The Brontë’s by Juliet Barker

The Brontë’s: A Life in Letters by Juliet Barker

One thought on “Spotlight On: Emily Brontë”