It’s that time of the month again when I get to talk to you all about my favourite things this month.

I can’t quite believe that we’re moving into March and the spring months and I’m so excited!

Here’s what I’ve been loving this month…

The two films that I really loved this month were Parasite and Jojo Rabbit. Both are so deserving of all the praise and awards they are receiving.

Parasite is directed by South Korean director Bong Joon-ho and centres around the idea of class war. I’m sure you’ve all heard a lot about it and, if you haven’t seen it yet, I really urge you to! It’s definitely opened up the world of foreign films for me and I’m definitely looking to watch more. Parasite is an incredibly thought-provoking, work-of-art film.

Jojo Rabbit is directed by Taika Waititi whose work I really enjoyed already. The story focuses on Jojo, a German boy, who joins a Nazi youth camp alongside his imaginary friend, Adolf Hitler. I won’t reveal much more than this but the film is definitely not what you’d expect for that subject matter; it’s light-hearted but also emotional, it’s funny with a serious side to it, it’s not afraid to make you laugh and then quickly feel uncomfortable that you laughed as the film takes several dark twists and turns. I love the style of how the film was shot and the cinematography and thought it was similar to some Wes Anderson films I’ve watched. I enjoyed it immensely!

Two TV programmes that I’ve been loving watching this month are The Pale Horse (BBC1) and This Country S3 (BBC1).

The Pale Horse is based on Agatha Christie’s book published in 1961. I love a crime/mystery show and I also love an Agatha Christie adaptation. So far, I have absolutely loved all of the adaptations the BBC have done of Agatha Christie’s work. The story starts with a young woman having been murdered. After this, a list of names appears but no one quite knows what the list means. One by one, the people on the list start to die. The programme is fast-paced, thrilling with an unexpected ending. The perfect Sunday evening watch!

This Country is one of my favourite TV programmes. Ever. It’s hilarious – I often find myself belly-laughing at this how (which is quite rare to be honest). The characters are so real and raw and you can definitely recognise traits in people you know, especially if you’re from the UK.  I love the way it’s shot in the style of a documentary and the acting is some of the best on TV. Would definitely recommend watching it!

Some other things I’ve been loving this month are:

Going on my second holiday of the year to Italy. Me and my boyfriend decided that this year we would try and get away (at least for a couple of days) every month this year so that we always have something to look forward to. Last month we visited Lake Bled in Slovenia (you can read my blog post here!) and this month we visited Puglia in Italy. This is somewhere we’ve visited before as my boyfriend has family here. I have very good memories of this place so the trip was very special. Plus, it was great to get out of London for a few days!

Anything from Rituals. This is kind of tied in with going on holiday. At the airport I popped into the Rituals store and got talking to the shop assistant. I’ve always loved Rituals and every year I ask for one of their shower gels for Christmas. I always thought they were a really expensive shop but some of their stuff is quite reasonably priced. I had a very long look around the store in the airport and decided I wanted to try much more of their products. I’ve also downloaded their app which is great – it has meditations, yoga flows, recipes, skincare tips, as well as special offers and discounts. I really love the brand and their ethos of “the power of rituals” – the everyday beauty of life that is waiting to be discovered, the seemingly meaningless moments that we tend to overlook such as taking a long bath, focusing on your mind, and finding happiness in the smallest of things. Their products are inspired by ancient traditions of Asian cultures and feel so luxurious (I’ve never had a shower gel that lathers up so much as the Rituals ones do!). The fragrances are absolutely beautiful, from calming scents to uplifting scents. Now I just need to stop myself from buying any more of their shower gel until my other ones are finished. 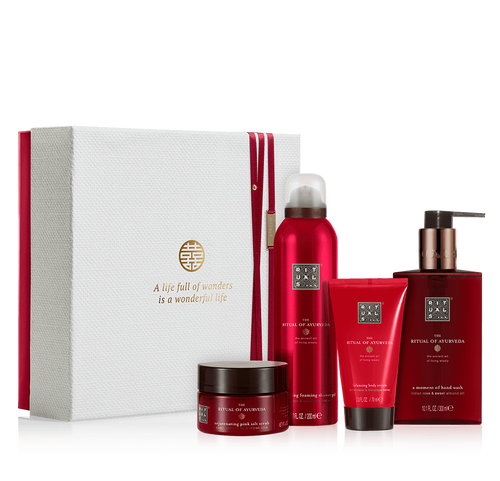 Those are all the things I’ve loved this month. What have you been loving?